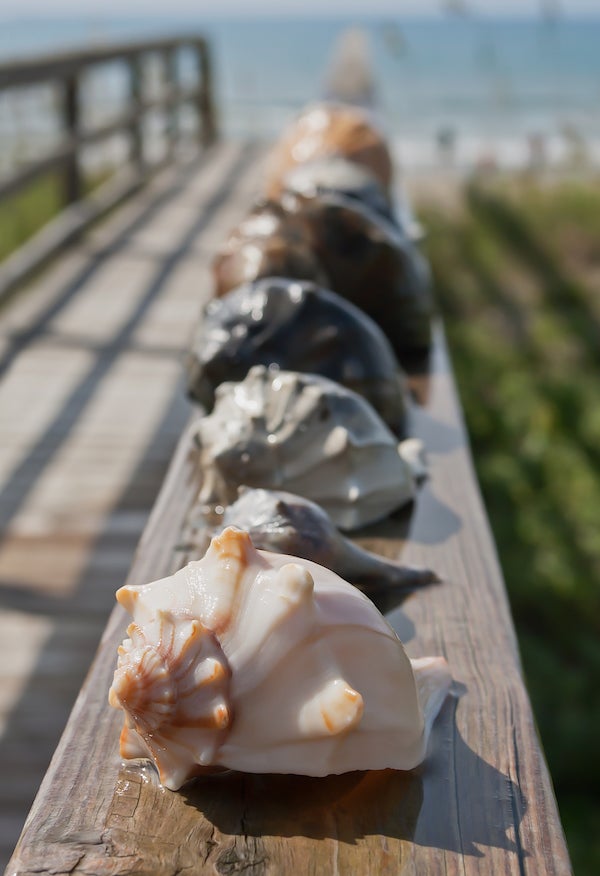 View Details
THE BEST SHELLING BEACHES ON THE EAST COAST
Ocracoke Island is a shelling paradise. For its abundance of rare shells, Ocracoke enjoys its designation as one of the best shelling beaches in the United States. Shelling enthusiasts could spend a lifetime looking for whelks, moon shells, coquina shells, helmet conchs, olive shells, and periwinkles. Sand Dollars regularly wash onto Ocracoke’s beaches and the Scotch Bonnet, the rare state shell of North Carolina, is often found in abundance on Ocracoke Island.

TOP SHELLING BEACHES ON OCRACOKE ISLAND
Shelling on Ocracoke is a popular island activity. Pristine uncrowded beaches offer beachcombers their own slice of sand to search for shells. The best time to find shells on Ocracoke Island is at low tide and in the morning before other beachcombers have had the chance to find prized shells. After a storm or hurricane, when the wind shifts from the east, the shelling is particularly good.

SOUTH POINT
Located on the southern end of Ocracoke Island, South Point is a great place to find sand dollars and scotch bonnets. If you’re lucky, you will find some of these treasures which have been carried ashore.

OCRACOKE’S NORTHERN BEACHES
Less frequently visited, the northern beaches of Ocracoke Island are the perfect place to get away from the crowds and find rare shells. In the winter, you will find expanses of sand with no one around except birds and sea life.

PORTSMOUTH ISLAND
Located just south of Ocracoke across the Pamlico Sound, Portsmouth Island, part of the Cape Lookout National Seashore, is full of shells. Visitors can return from Portsmouth with tons of whelks, scotch bonnets and lettered olives. If you’re looking to get away and enjoy empty beaches full of magnificent shells, Portsmouth Island is well worth the visit. You can book a tour to Portsmouth Island or rent a skiff, you are the captain.

WHELKS
Ranging in size and often confused with conchs, whelks are very common on the beaches of the Outer Banks. The lightning whelk is the largest and can grow to over 14″ long. The knobbed whelk is exactly like the lightning whelk except it has a right-sided opening instead of a left-oriented one. And the channeled whelk has deeply channeled spirals instead of the spiny spirals. Whelks range widely in colors and sizes. You can find a brightly colored 2″ whelk or a 14-16″ giant shell. There are an infinite variety of whelks on the shores of Ocracoke Island.

COQUINA CLAM SHELLS
The remnants of coquina clams, these bright shells come in many sizes. These multi-colored, small shells have beautiful patterns and endless intricacy.

PERIWINKLES
Small and spiral-shaped, periwinkles are common shells that are usually a gray-brow color. Periwinkles, often referred to simply as winkles, have six to seven coils with fine wrinkles.

COQUINA CLAM SHELLS
The remnants of coquina clams, these bright shells come in many sizes. These multi-colored, small shells have beautiful patterns and endless intricacy.

OLIVE SHELLS
Smooth and shiny, olive shells are cylindrically shaped and have a well-developed stepped spire. Olive shells are usually muted in color but extremely glossy. Olive shells have a distinct shape and make for great Ocracoke souvenirs.

Thank you for your interest in shelling on Ocracoke Island and the Outer Banks. The magic of the shelling is found when you look closely.